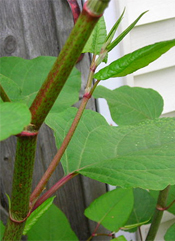 Japanese Knotweed (Polygonum cuspidatum) is an invasive plant; it is a robust perennial that spreads rapidly to form dense thickets of vegetation.

Invasive plants may not be considered a contaminant however this does not mean that they do not pose concerns with respect to your site.  The most common but by no means the only invasive weed is Japanese Knotweed (Polygonum cuspidatum). Japanese Knotweed is a robust perennial that spreads rapidly to form dense thickets of vegetation. The plant has a strong rhizome root system, which can be up to 2m deep and several meters away from the parent plant. The plant can spread by cut stems or underground via the root system.

Churngold Remediation has experience in the treatment, containment and management of Japanese Knotweed via the application of a range of techniques on various sites across the UK.

This invasive plant is becoming more common and as well as being physically damaging by penetrating asphalt, walls, foundations and drainage systems, it is also covered by legislation as a controlled waste.

As identified within the Wildlife and Countryside Act, 1981 - it is illegal to spread Japanese Knotweed. Any excavated soil from areas where the plant has established must be disposed of at a licensed landfill site and not reused.


The Environmental Protection Act 1990 - places a duty of care on all waste producers and Japanese Knotweed is identified as a controlled waste. This means it has to be dealt with within your legislative requirement for waste management.

The earlier you get us involved the more cost effective it will be for you.

Identification is the most important step as is a Survey of the site in order to identify what invasive plants there are and remove the possibility of spreading them around the development. The earlier you get us involved the more cost effective it will be for you. There are a number of treatment methods that can be employed depending on the time and space available.